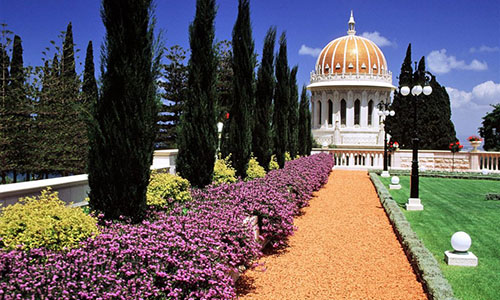 The Bahá’í Faith is the youngest of the world’s major religions. Throughout history, God has sent to humanity a  series of divine Educators—known as Manifestations of God—whose teachings have provided the basis for the advancement of civilization. These Manifestations have included Abraham, Krishna, Zoroaster, Moses, Buddha, Jesus, and Muhammad. Bahá’u’lláh, the latest of these Messengers, explained that the religions of the world come from the same Source and are in essence successive chapters of one religion from God.  Bahá’ís believe the crucial need facing humanity is to find a unifying vision of the future of society and of the nature and purpose of life. Such a vision unfolds in the writings of Bahá’u’lláh.

The Bahá’í Faith began in 1844 in Persia (Iran) when a young man, who called himself ‘The Báb’ (which means ‘The Gate’) announced that He was a Messenger of God. He said that he was the Herald for another Prophet, the Promised One of all religions. In 1852, imprisoned in a dungeon for his faith in the Báb, a Persian nobleman, now known as Bahá’u’lláh, was summoned by God to bring to humanity the new Revelation of which the Báb had spoken. Bahá’ís are the followers of Bahá’u’lláh (an Arabic title meaning ‘The Glory of God’). They believe that Bahá’u’lláh (1817-1892) is the Promised One foretold by the Báb and by all of the Divine Messengers of the past and that He has delivered a new Revelation from God to humanity. Thousands of verses, letters and books flowed from His pen. In His Writings, He outlined a framework for the development of a global civilization which takes into account both the spiritual and material dimensions of human life. For this, He endured 40 years of imprisonment, torture and exile. In just over 100 years, the Bahá’í Faith has grown from an obscure movement in the Middle East to become the second most widespread of the independent world religions. Embracing people from more than 2,100 ethnic, racial and tribal groups, it is probably the most diverse organised body of people on the planet.

“He Who is your Lord, the All-Merciful, cherisheth in His heart the desire of beholding the entire human race as one soul and one body.”— Bahá’u’lláh

Bahá’í beliefs address such essential themes as the oneness of God and religion, the oneness of humanity and freedom from prejudice, the inherent nobility of the human being, the progressive revelation of religious truth, the development of spiritual qualities, the integration of worship and service, the fundamental equality of the sexes, the harmony between religion and science, the centrality of justice to all human endeavours, the importance of education, and the dynamics of the relationships that are to bind together individuals, communities, and institutions as humanity advances towards its collective maturity.

“The well-being of mankind, its peace and security, are unattainable unless and until its unity is firmly established”. – Bahá’u’lláh

The authentic writings of the Báb and Bahá’u’lláh are regarded as Divine Revelation. The Scriptures of other faiths, which include the teachings of earlier Manifestations of God – such as Buddha, Moses, Jesus, Muhammad – are also regarded as Divine Revelations. Bahá’ís recognise the world’s great holy books – books from the Torah to the Qur’án and including Hindu, Buddhist, Christian and Zoroastrian scriptures – as representing humanity’s record of God’s revealed Word.  Bahá’ís believe that each new Revelation has two parts. It restates and extends our understanding of spiritual truths, and also brings laws and teachings appropriate for that stage of humanity’s development. The spiritual message has been universally the same – the love of God and obedience to His will, and love for humanity. The social teachings have evolved in line with the capacity of mankind.

“The Word of God is the master key for the whole world, inasmuch as through its potency the doors of the hearts of men, which in reality are the doors of heaven, are unlocked.” – Bahá’u’lláh

The first Bahá’í in Maidenhead was Mrs Helena Eliza Kempton. Then in her 99th year, Helena Kempton became a Bahá’í on July 9, 1962. Her enrolment marked the foundation of the Maidenhead Bahá’í community. She had come to know of the Faith through her daughter, Honor Kempton, another Maidonian, who had become a Bahá’í in San Francisco in 1939.  Honor went on to help found the first Bahá’í communities in Alaska and Luxembourg, where she passed away in February 1981.

The first Spiritual Assembly of the Bahá’ís of Maidenhead – the governing council comprising nine members elected in each locality each year – was elected in April 1978.  The first Bahá’í marriage in Maidenhead took place a few months later. There have been Bahá’ís living in Maidenhead and the surrounding areas ever since.

http://re.bahai.org.uk Bahá’í RE Resources for Schools in UK