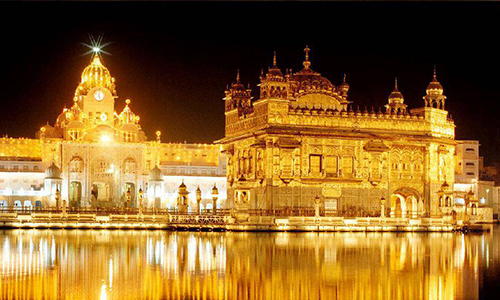 Sikhism is the youngest of the great world faiths. The most important thing in Sikhism is the internal religious state of the individual.

Sikhs think religion should be practiced by living in the world and coping with life’s everyday problems.

The Sikh religion was founded by Guru Nanak and is based on his teachings and those of the nine Sikh gurus who followed him.

Sikhism is a religion with only one God. Sikhism emphasises social and sexual equality. Sikhism stresses the importance of doing good actions rather than merely carrying out rituals.

For a Good Life

Sikhs believe that the way to lead a good life is to:

The Sikh place of worship is called a Gurdwara. Gurdwara is a Punjabi word meaning gateway to the Guru.

The Sikh scripture is a book called the Guru Granth Sahib

The tenth Sikh Guru decreed that after his death the spiritual guide of the Sikhs would be the teachings contained in that book, so it now has the status of a Guru, and Sikhs show it the respect they would give to a human Guru.

There are currently around 20 million Sikhs in the world, of which around 500,000 are in the UK.

Sikh men are easily identified by their beards and turbans, which are an outward sign of their religious identity.

This custom is one of the five Ks, or five physical symbols worn by Sikhs:

The Guru introduced them for several reasons:

The Amrit Ceremony is the initiation rite introduced by Guru Gobind Singh when he founded the Khalsa in 1699.

A Sikh can go through this initiation as soon as they are old enough to understand the full committment that they are making.

The ceremony takes place in a Gurdwara, before the Guru Granth Sahib, and in the presence of 5 initiated Sikhs (who represent the Panj Piyaras, the first 5 Sikhs to be initiated).

During the ceremony, hymns are recited from the Sikh scripture, prayers are said, and the principles of Sikhism are affirmed.